The world-famous comedy team, The Three Stooges have entertained families for generations with over 200 film shorts, feature films, TV and stage shows.

If you are a parent who would like to introduce The Three Stooges to your children, let us help with this Three Stooges Video Primer. With The Boys prolific body of work, there are plenty of film shorts for the kids to enjoy.

Entertaining children has always been important to The Three Stooges. In addition to their famous films, The New Three Stooges was a popular cartoon/live action Saturday morning series during the 1960’s.

Here are just a handful  of our favorite shorts to share with the younger Stooge fans:

In The Three Stooges film short Nutty But Nice, The Boys are singing waiters whose silly antics inspire two doctors worried about little Betty Williams, whose father has been kidnapped. Dressed as three little girls, complete with balloons and giant lollipops, the Stooges visit the depressed girl in the hospital, but even they can’t bring her around. The boys volunteer to find Mr. Williams.

In The Three Stooges film short Calling All Curs, The Stooges are veterinarians treating a rich lady’s dog named Garcon. Two men, posing as reporters, come to check out the Stooges’ clinic. They are really dognappers who capture Garcon and hold him for a $2000 ransom. The Stooges then search for Garcon and arrive at the home of the dognappers for a showdown. Curly Howard was an avid dog lover and enjoyed every moment of working with canine costars.

There’s nothing better than a Three Stooges’ pie fight! Here we have a clip from The Sweet Pie and Pie.

The Three Stooges disguised as children in this timeless clip from All The World’s A Stooge. 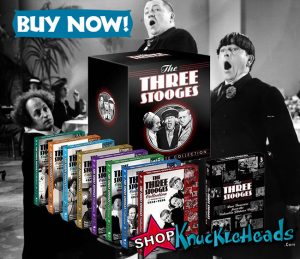